I've had a pasta attachment for my Kenwood for a couple of years, which I can use to make long pasta loops. The attachment for cutting spaghetti or tagliatelle is too expensive for me, because I prefer to cut by hand, roll with a model driver, stand out or punch out.
Just a few years ago I made pasta quite regularly. Only from semolina and water, sometimes from egg and flour, sometimes with no salt and olive oil. As tagliatelle, farfalle or ravioli. Colorful striped, red or green. Dried fresh or over the drying rack. Packed in cellophane sachets and given away for Christmas.
At some point, the appetite for it diminished and I've been making less and less pasta. I have to say that I'm not the typical pasta lover who enjoys a portion of spaghetti with pesto or quick tomato sauce. If I had the choice between potatoes and pasta, I would always choose the potatoes.
Now it has me but itching again in the fingers and I once again felt like homemade ravioli. I like to fill it with all sorts of stuff that I like right now: spinach, ricotta and pine nuts; Gorgonzola and walnuts or like here with dried tomatoes, Serrano ham and buffalo mozzarella.
The nice stuffed ravioli is that you can really put everything in and mix the ingredients as you like. Instead of mozzarella, just use grated Parmesan instead of Serrano ham, Parma ham, etc.
This time, I accessed what I had in my fridge.
And then I got back to my kitchen machine and rolled through the pasta dough train by train. And then individually raviolis gouged, which is quite tedious.
Although I have a practical ravioli, which is quite small and so hardly filling fits in the ravioli. Then I prefer to use my great Plastikklappdinger in three sizes, where much more filling fits.
For the pasta dough I take a very simple standard recipe from exactly 2 ingredients:
200 g wheat flour type 405 and
2 organic eggs size M
As I said, there are a dozen varieties, I also have Italian pasta flour, which consists of a mixture of finely ground semolina and type 0 flour, but in that case I just wanted Just make the good old standard recipe.
Incidentally, I usually do twice the recipe to directly cut and dry some tagliatelle.
Flour and eggs are simply kneaded by hand or in the food processor until a firm and elastic dough is formed.
Then the dough lumps Wrap with cling film and refrigerate for 1 hour Let's rest.
For the filling I finely diced 125 g buffalo mozzarella this time and put it into a bowl. Also finely chop and mix under the mozzarella. Cut 70g Serrano ham into thin strips and fold in.I fold the dough again after the first roll and roll it flat again in both directions with the rolling pin. Only then does the actual rolling start.
My pasta machine has 9 stages and I run the dough sheet twice each time, so from each side through each stage. For filled noodles, I roll to the 7th level.
This time I punched out the noodles individually with my ravioli press, then put them in the press, painting the edge with a little water , in each case a good 1 Tl from the filling in the middle and pressed together. The finished ravioli I always put on a floured wooden board and cover it with a kitchen towel.
From the dough I get so about 20 ravioli, which is enough for us 2 portions ( I usually eat only 6-7 of them, then my Pastahunger is breastfed again.
Bring at least 3 liters of water to a boil in a large pot, then salt neatly.The ravioli prickly Put in water and do not boil for about 4-5 minutes, as they rise rather quickly stir gently and turn the raviolis in water.
Drain the finished ravioli in a pasta strainer 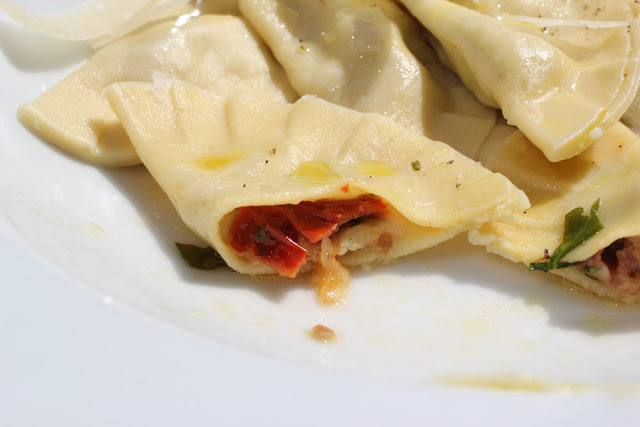 © Copyright 2019 Unofficial site of Bacon Bar
All rights reserved. This site is in no way affiliated with or endorsed by Bacon Bar. It exists as a compendium of supporting information intended for informational purposes only.

If you want to buy this website, please don't hesitate to contact us via e-mail: domain (dot) sales (dot) org @ gmail (dot) com